Air Shower working principle of common version: air filter through the prefilter, then through high pressure air shower machine will be pressed into the shower room by static pressure box, clean air filter 99.99%@0.3um filtered by a rotatable nozzle to spray from all directions the human body, so as to effectively and quickly remove dust particles, after the removal of the dust particles through the prefilter and HEPA filter return to the air shower room area again. 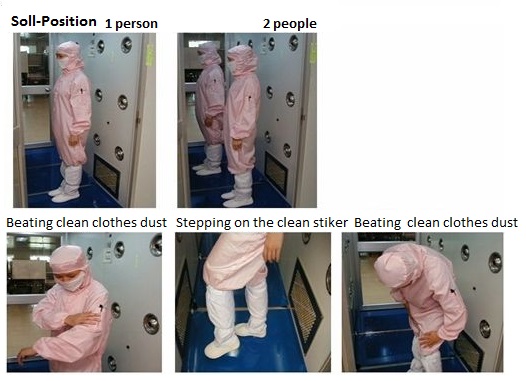 Air shower working principle of ANLAITECH PURIFICATION finishing version: the main working principle of air shower room is through the primary air filter and HEPA filter after blowing dust on the human body, that is to say the indoor air through the air shower filter by centrifugal fan pressure to the static pressure box, then through the effective filter after the clean air from the high speed from the air shower nozzle, the nozzle angle can be adjusted, which can effectively blow body or carry items attached to the surface of dust, dust blowing air circulation again through the primary filter and HEPA filter, in order to achieve the purpose of air shower. In fact, there is a major principle of physical adsorption of the dust by the filters that’s the main reason why air shower room can remove dust 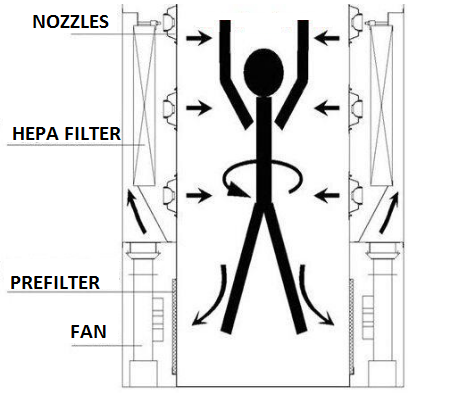 The air shower room is electrified normally, and the touch screen enters the working state

2 ) Access procedure : Put on anti - static clean clothes - open front door , personnel / goods enter - personal / cargo air shower room to start blowing , air speed up to 25m / s or more , ( the person is in the air shower area turn left and right for several times , so that the whole body is in the air shower), The electric lock works, front and back doors can not open - air shower room after 15 seconds after the automatic stop air shower(the initial setting of air shower time is set to 15 seconds , or automatically set by the user ), the front door electric lock works , the personnel / goods do not allow the front door to exit - open the back door , the person / goods exit - exit door process end

2 . After entering the air shower room: pass directly through the photoelectric sensor, start blowing, please lift your hands up in the room and then rotate 360 degrees for showering

3. blowing out: after the air shower chamber fan stopped operation, after two seconds to open the door and leave the shower room

In the process of air shower, the front and back doors of the shower room are in lock state, insiders should not force open, lest damage the device and door lock, if met the emergency, please press the emergency stop switch, the air shower room will stop the work. The entrance and exit door is open at this time. During the idle period, the air shower door is in an electronic interlocking state. Only one side of the door can be opened. Please do not force to open the open

1) when the personal / cargo air shower room is in the blowing state, it is strictly prohibited to open the door (until the shower stops blowing). In case of emergency, press the emergency switch to stop blowing and then open the door

2) after the personal / cargo air shower is electrified, the electronic interlock between the two doors is prohibited. When the door on one side is not completely closed, it is strictly prohibited to force the door on the other side. 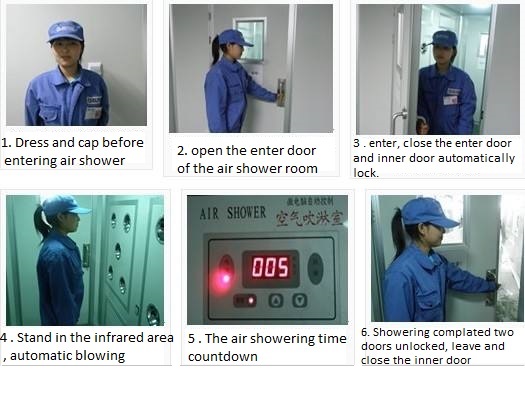 1) it is suggested that the filters be replaced timely(prefilter 3monthes, HEPA filter 6months), and the replacement cycle can be extended or shortened as the actual use is used.

DOCUMENTS COMMING FROM www.cleanroomffu.com, please do not reproduced

Our company fully into production for the hospitals Clean rooms

Congratulations to our company as a HIGH-TECH Enterprise